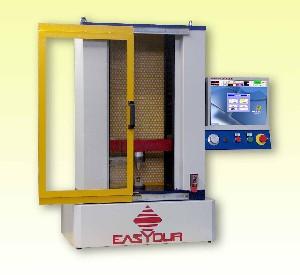 Operation is manual, semiautomatic, and automatic.

The test instrument can be modularised taking into account that the structure can house 3 permanently installed load cells for compression tests, and tensile grips for tests, including at break.

The system uses several cards (for axis and cell reader control) that are connected via CanBus to enable displacements to position or force at a feedback speed of 1000 Hz.

Minimum indexing is 1/32.700 (this can be increased by slowing down load cell reading).

The universal testing machine operates with computerized numerical control and includes a computer with HD and touch screen.

It is a self-supporting, two-pillar structure with ball screws.

It enables cycles of stress of sinusoidal form which result in machine preservation and remarkable performance - notwithstanding the ball screw mechanism.

The computer programme for this machine has entirely been developed by Easydur based on Windows XP, with statistics and certificate management in Excel format, which allows users free modularisation and customisation.

Up to 8 load cells can be inserted in the machine, 3 of which are permanently installed.

Load cells are selected via software and are constantly protected from overload, including when not in use.

In the event of an unpredicted shock or out-of-scale condition, the axis will automatically unlock.

Ease of use: each test can be easily performed by using the keys on the front panel. There is no need to access the preset programmes.